Meeting the demand for growth at Marston Water Recycling Centre, whilst delivering a 100 per cent reduction in capital carbon and significantly improving biodiversity. 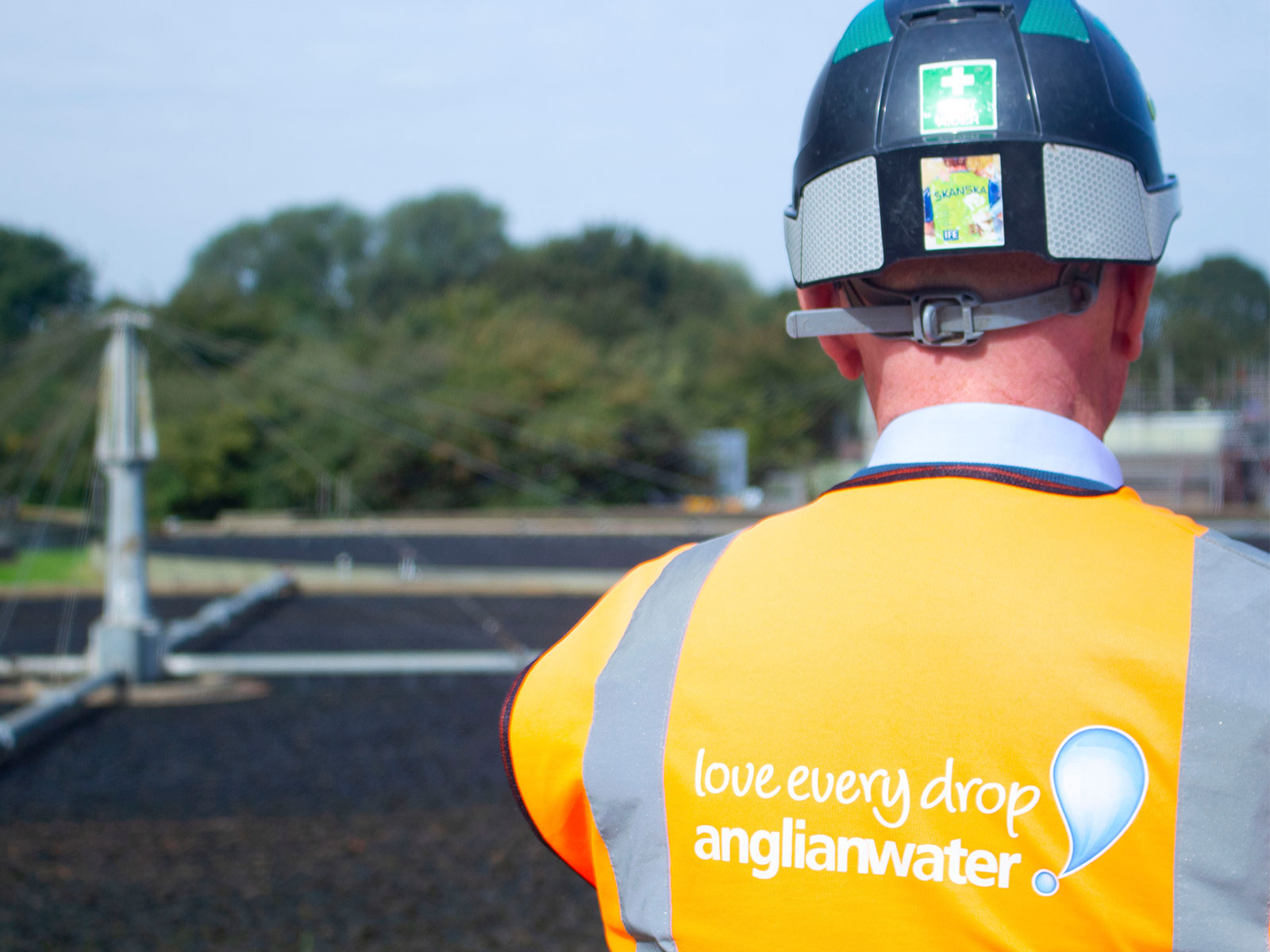 Marston Water Recycling Centre (WRC), near Grantham, serves a population of approximately 63,500 from Marston and the surrounding areas,with a capacity to treat up to 392 l/s of wastewater. The projected population growth in the area is approximately 76,000 until 2031, with the significant proportion of this growth estimated to occur by 2022.

Following a growth programme review; due to plans for new housing developments in the area, additional capacity within the Water Recycling Centre was required.

The tertiary treatment process at Marston WRC consisted of four large grass plots covering an area of 64 acres, and was at its limit of capability to remove ammonia. Therefore a solution was required in order forAnglian Water to continue meeting their discharge water quality standards.

In the early stages of the project,the proposed solution was to stop using the grass plots and build a new pumping station and nitrifying sand filter; requiring new concrete structures whilst phasing out the natural cleaning process.

The area is designated as a Local Wildlife Site, and the original solution would have had a detrimental effect on the local biodiversity. The site is also very accessible to the public due toseveral public rights of way running alongside and through the grass plots, an is of high amenity value to them. Consequently, an alternative solution was required.

After further investigation, the proposed solution was adapted to refurbish the existing grass plots to accommodate the increased treatment capacity requirements.

The site contains four grass plots at varied levels of growth. The initial step was to cut and remove vegetation on grass plots one to three, which commenced in late January 2019. This ensured that the work was completed prior to the start of the bird nesting season.

Following this was a series of enabling activities to further check viability of the solution and better understand what reprofiling was required over the grass plots. This included jetting of the existing pipework in March 2019, to ascertain the amount of additional drainage that would need to be installed, and remedial works on the inlet channel to ensure flows across all four plots were correctly distributed.

The next step was to refurbish the grass plots by cutting back vegetation.

The project team adopted specialist digital surveying techniques, provided by leading sensor specialists, iRed, to ascertain the overall health of the grass plots,topography of the site and the location of the pipework.

This technique used near-infrared and multispectral mapping surveys throughout the stages of vegetation clearance. The surveys were taken 60m above ground level using multispectral and visual cameras, capturing data in five narrow multispectral bands, enabling the team to:

·        Generate a 3D model from photographic based point cloud.

·        Determine where the ground was saturated/dry.

·        Determine plant health and biomass, before and after the vegetation was cut.

·        Discover the extent of crevices within the topography.

·        Provide accurate health and safety recommendations within the working boundary.

The use of multispectral banding beyond photogrammetry allows for accurate interpretation of what can’t be seen from a photo or site walk over. The output below shows the alternative layers of information that can be overlaid on top of the site topo survey drawing.

The information provided from the surveys helped build a 3D model of the site, allowing the design team to provide accurate x-y-z coordinates to the construction team.

The drone surveys resulted insignificant time and cost savings to the scheme; supported better identification/management of risk; and enabled a robust operational regime to be implemented, leading to a better overall understanding of the grass plots, more informed and better decision making during design

The project team identified and engaged local stakeholders early in the planning process, before commencing work on site. This included a local bird watching group who regularly visited the site, local residents, Lincolnshire County Council, Lincolnshire Wildlife Trust, the Highways Inspector, pedestrians and horse riders. Through early engagement, the project team were able to better plan and inform, whilst assuring the local community that the work would include several ecology surveys, ensuring a clear benefit to local biodiversity would be achieved.

The project team had early engagement with ecologists, due to potential nesting lapwings on grass plot three, and also built relationships with local birdwatchers who confirmed the increase in rare bird sightings since the plots were cut.

However, upon completion, the final carbon calculation has been measured at 61.3 tonnes of capital carbon – a 90% reduction. The project team have further reduced this figure by planting trees on site which have offset this.

The final carbon calculation is zero tonnes of capital carbon, making this a carbon neutral project – providing a 100% reduction in capital carbon based on the Final Business Plan.

In addition to the carbon savings, there have been benefits to biodiversity. The site supports an abundance of wildlife including otters, badgers, bats, grass snakes and nesting birds, and consequently this attracts many bird watchers.

56 different bird species were identified during the initial ecology surveys of which nine were recognised as being rare or vulnerable species of conservation concern(including barn owl, cuckoo, green sandpiper, grey wagtail, hobby, lapwing,mistlethrush, ringed plover and skylark). The scheme has received very positive feedback from the local birdwatchers who have stated that through the management of the plots, new bird species have been seen in the area which haven’t been seen in that location for many years.

There have also been significant financial savings, with a percentage reduction in cost of 43.2% based on the initial solution and the Final Business Plan.

The project reused soil from the excavation and maintenance works on site to repair the crevices on the grass plots. This saved 1776T of soil from needing to be imported. Gravel used on the project was also reused - the bund walls on the plots were enhanced and improved using 370T of gravel which had previously been used for the temporary lagoons on site.

Part of the works involved jetting the drainage pipes which run across the plots. The water used for this was recycled in a circular system so that the smallest amount of water wasused. Any water that became saturated and dirty was then taken back to the head of the treatment works, so it could be cleaned and discharged locally.

The only potable water used onsite was for human consumption. All other water was grey water including that used in the toilets etc.

100% of waste was diverted from landfill on the project. This included 1608T of green waste which was sent to a local composting facility. 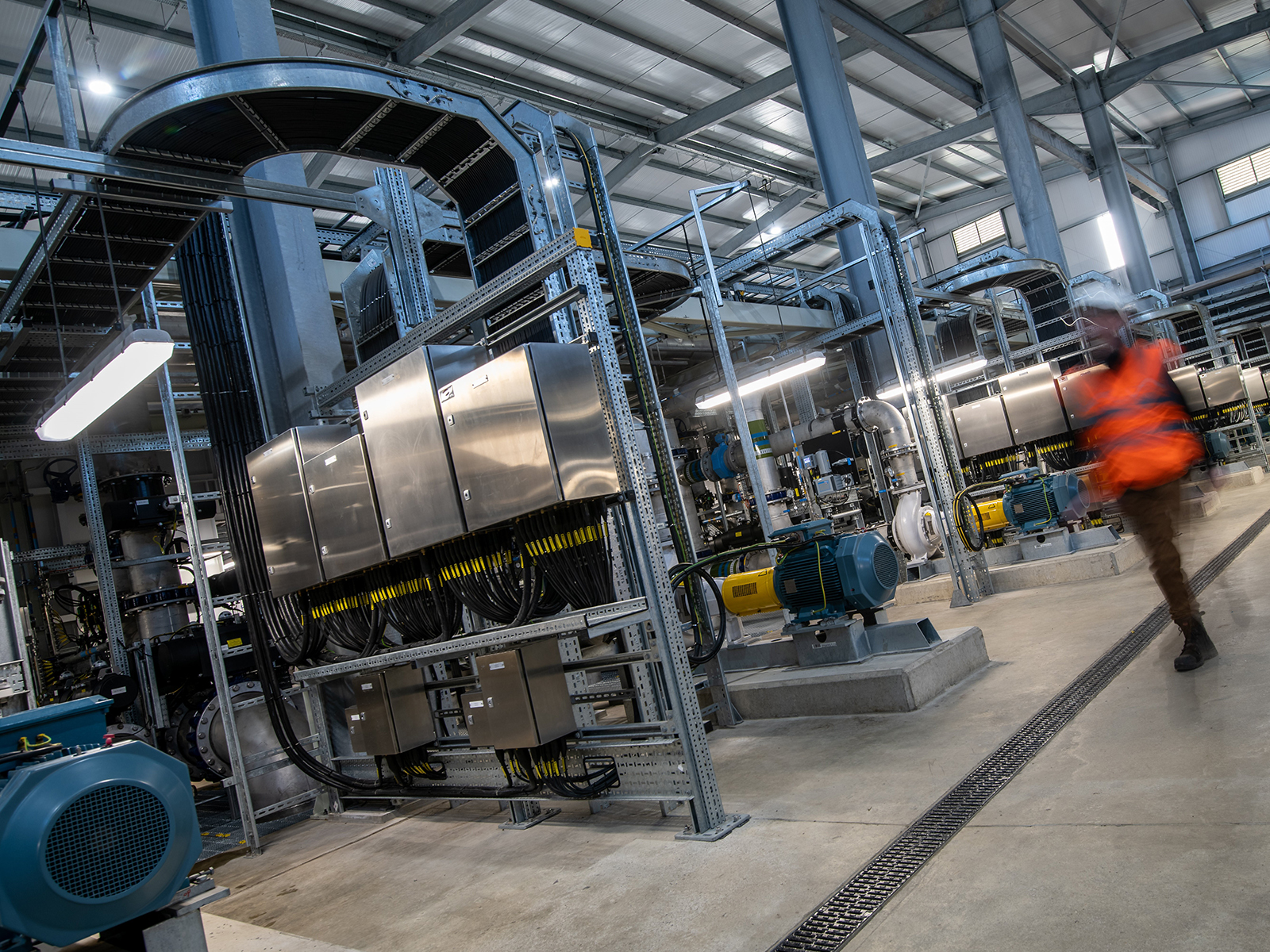 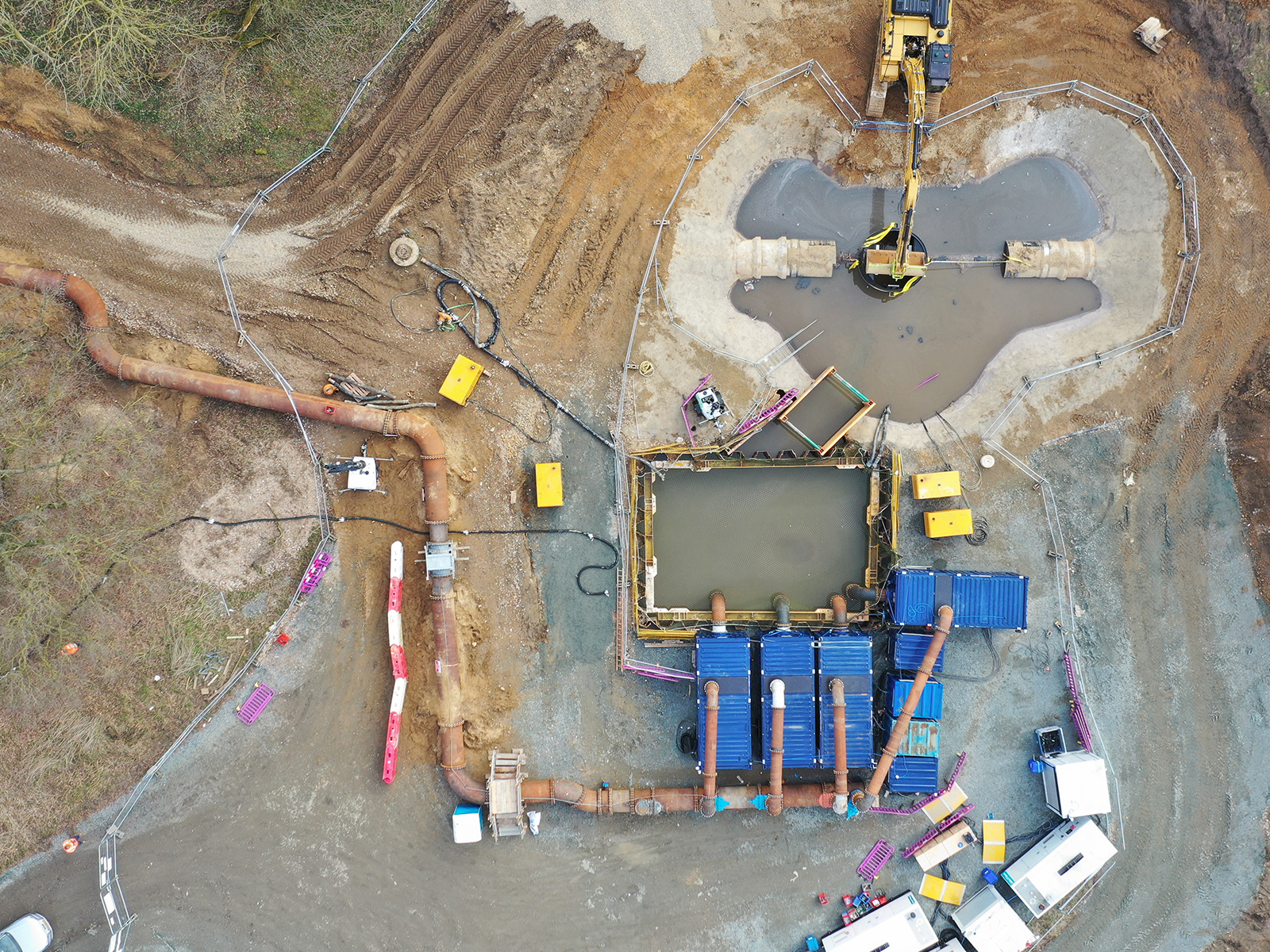 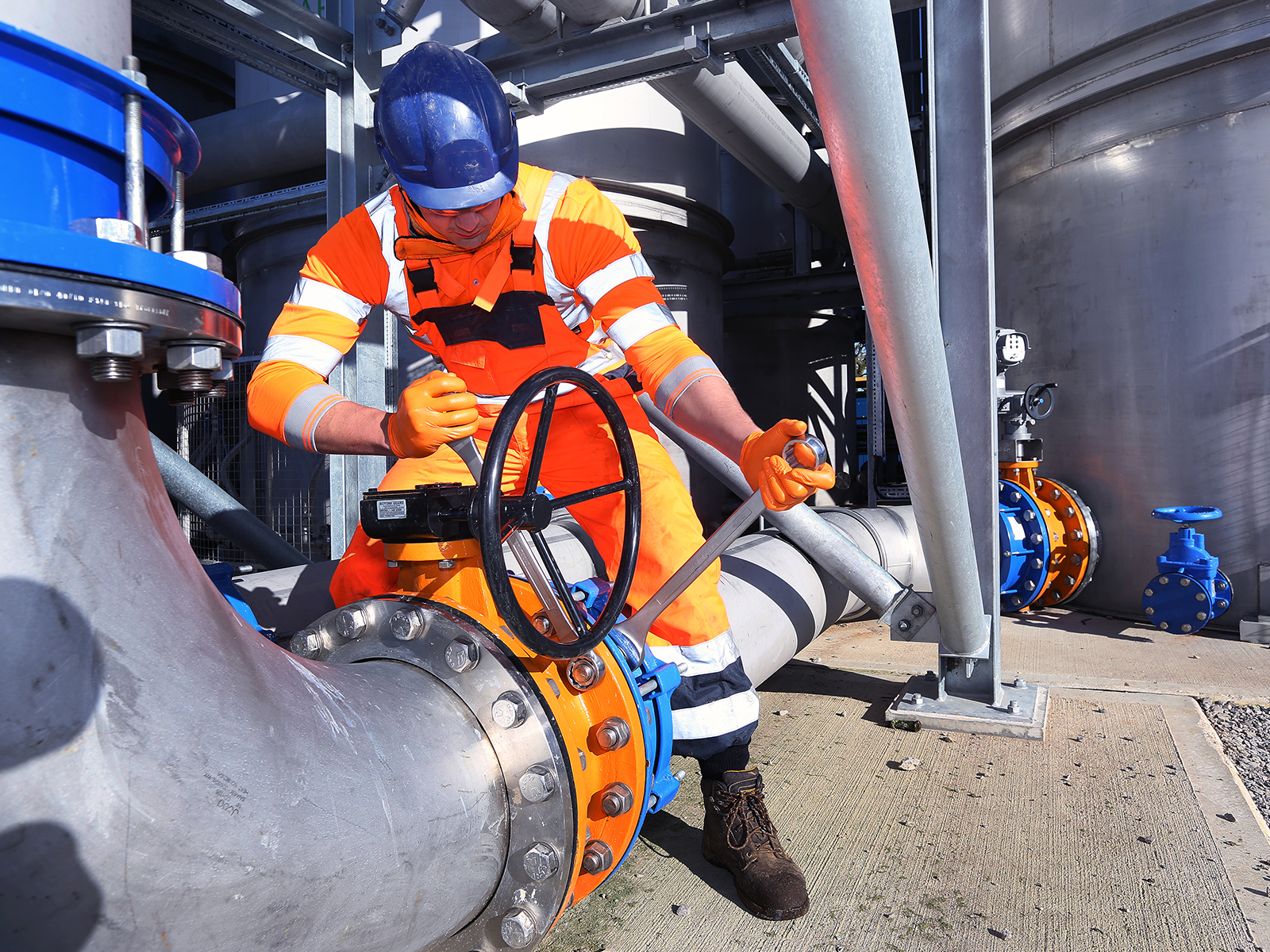